This week sees the release of a film based on one of my very favourite children’s books, The  Secret Garden, written by Frances Hodgson Burnett. This beloved story was first published in 1911 and is one of the author’s most popular novels. It is a classic of English children’s literature. Talking to a lot of my friends it won’t be only the kids who are going along to see this well – loved story.

The Secret Garden tells the story of 10 year old, Mary Lennox, who lives in British India with her parents.They never wanted her and made every effort to ignore her. She is spoiled by the servants and is quite disagreeable. After the death of her parents from cholera, Mary is sent first to a clergyman and his family’s home. Here she is tormented by his children before finally being sent home to England. She travels to Yorkshire where she lives with her wealthy uncle, Archibald Craven in his mysterious manor, Misselthwaite. Master Craven has been in a state of inconsolable grief since the loss of his wife.

Mary hears about a secret garden from Martha Sowerby, her Yorkshire maidservant. This garden belonged to the late Mistress Craven; after her death Archibald locked the garden door and buried the key. Mary becomes intensely curious and is determined to find it. When she finds the garden Mary also unlocks some family secrets and this wondrous and enchanting garden will change all their lives forever.

The Secret Garden has been created by the producer of Harry Potter and Paddington, David Heyman. He has assembled a stellar cast including Colin Firth as Uncle Archibald, Julie Walters as Mrs Medlock and Dixie Violet Egerickx as Mary. This 2020 update captures all the magic and innocence of the book with some modern day special effects thrown in. It is filled with  fantasy and just the right amount of mystery and joy needed as an antidote to these uncertain times. Dixie Violet Egerickx is a revelation as Mary and carries the weight of her lead role well. A star to watch for the future!

To escape into a nostalgic tale or introduce your children to a magical classic filled with plenty of modern day FX to entertain them, The Secret Garden, is a lavish and wondrous jaunt through India, England and a snapshot of another time. Unlock your imagination, suspend belief and sit back in the cinema and enjoy this classic tale.

The Secret Garden is in cinemas September 17, just in time for the school holidays. 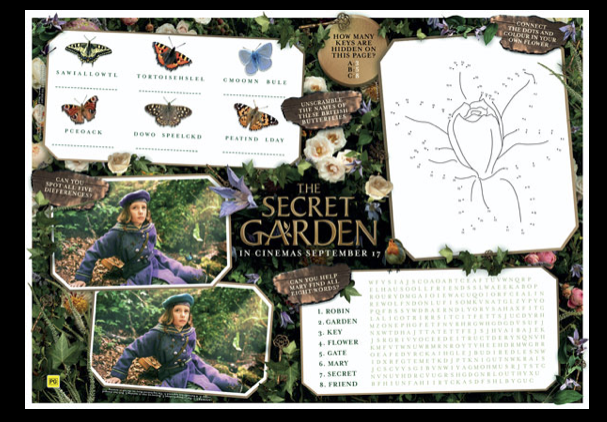 Freelance writer, wife and mother of three sons, occasional supply teacher and aspiring romance author, Michelle Beesley can be most often found in a coffee shop chatting with friends or beside a rugby field cheering on her favourite teams.

Michelle is a prolific—albeit reluctant—traveller, keen walker, bookworm and yoga enthusiast who loves anything pink or sparkly (including champagne!).

Cheers to #WorldGinDay! ✨
On Saturday June 26th, the @qsorchestra present the premiere of a new work by acclaimed Australian didgeridoo player and composer, William Barton ✨ Get your tickets here - qso.com.au/events/2021/maestro/epic-sounds
#SheSociety has double passes to giveaway to Dream Horse!
✨#MayaAngelou #TuesdayThoughts